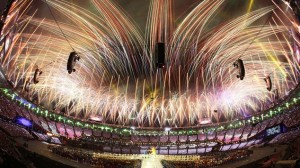 Fireworks at the Closing Ceremonies for the London 2012 Olympics

The Olympics Closing Ceremonies were Sunday night, and while I’m sad to see them end for this year, I am looking forward to Rio!  This year’s Games were fantastic and memorable, not to mention groundbreaking.

Perhaps the biggest story of this year’s Games was all about the women athletes.  For the first time ever, each of the 204 countries in attendance had at least one female athlete.  59 of the 104 USA medals were won by women, and 29 of those were gold.  Making its debut was Women’s Boxing, with the first gold medal going to 17 year old Claressa Shields, who hails from Flint, MI.  (You go, girl!)

I watched Oscar Pistorius, the first double-amputee to compete in the Olympics, run in the semifinal for the 400m.  While he didn’t qualify for the final, I was in awe when Kirani James of Grenada, who did win the heat, asked to switch name bibs with Pistorius after the race was over (James would go on to win the gold medal in the 400m).  My heart went out to the German diver who did a “reverse bellyflop”, resulting in straight zeros for his score.  I also watched Gabby Douglas experience the thrill of victory and the agony of defeat.

Kirani James was one of 7 athletes who won the first medals for their country…ever!  Michael Phelps won his last medals, totalling 22 for his Olympic career, more than any other athlete in history.  I shed tears with Misty May-Treanor and Keri Walsh-Jennings when they won their third consecutive gold medal in beach volleyball.

This was an awesome year for the athletes…and the Opening/Closing ceremonies were pretty awesome, too!  I loved how the ceremonies were a lesson in the history of British literature and pop/rock music.  “So tell me what you want/what you really really want”…the Spice Girls reunited was what I wanted…and the Ceremonies delivered!  I am excited for the Rio de Janiero games in four years, and can’t wait to see what progression the games make in the meantime!